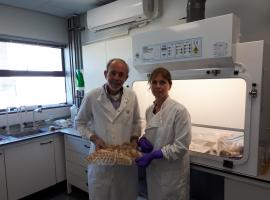 The Predatory Bird Monitoring Scheme team had the pleasure of hosting a visit from Colin Shawyer (image, left), raptor biologist and principal scientist of the Wildlife Conservation Partnership, an ecological consultancy. Colin who founded the Barn Owl Conservation Network project in 1988 and acts as its Coordinator: UK and Ireland, spent much of the day-long visit working with our own Elaine Potter (image, right) discussing and sharing practical experience of post mortem observations, particularly relating to using plumage to age birds.

Having originally worked for many years as a cardiovascular research scientist, Colin has since then, studied barn owls for almost 40 years. During this time he has served on the Government’s Raptor Working Group and the Pesticides Safety Directorate having undertaken research for Government and its Agencies. He has conducted or co-­directed two national barn owl surveys and worked with the British Trust for Ornithology for ten years developing its Barn Owl Monitoring Programme. In 2010 he was awarded the Global Owl Project; Special Achievement Award which he received in America for ‘excellence in the science and restoration of the barn owl population in Britain and Ireland’.

Elaine comments “It was great to have Colin visit to share our experience and techniques in ageing barn owls. This is important as our work has demonstrated that adult birds are both more likely to have anticoagulant rodenticides present in their liver, and at higher concentrations.”

Colin also told us ‘Throughout my professional life I have been a keen supporter of the PBMS and I am pleased that I could provide some practical help.  I very much enjoyed my day with Elaine and the team and to share experiences with them.’